So, back in November I thought the Lord was teaching me lessons about dependence. When I caused a collision at a busy intersection (after multiple car breakdowns), I was overwhelmed with disaster. I called it a "season" and walked around with humbled, hunched shoulders diligently learning my lessons.

I took a deep breath after Thanksgiving in Iowa, with car keys in hand and 17 hours between me and my next attempt at Austin, Texas. The Lord's presence was always brilliantly beside me, even as I stopped in Joplin, Missouri to find that the key would not turn in the ignition. After stopping at the Nissan dealership, the Toyota place next door, and the best key cutter in town, an angel named Gary (who drives around town in his van) was my final attempt to find a solution. He successfully cut a new key for a small fee and I was on the road once again.

When I returned, I was thrilled to have four wheels of freedom once again. I slid so comfortably into my old, independent shoes. It's surprisingly easy to forget painful lessons, even as the stories were still on my tongue. I shared my great gratitude for community and God's providence, while my soul silently resolved to make my experience a story of the past.

God, in all his grace, sadly saw I needed another reminder. When I returned from Christmas, I found that my freedom wheels would once again be indefinitely removed. The mechanics assured me the repairs would exceed the price of the car and I stationed the Nissan firmly in the driveway, where it stood as a glaring reminder of my humanness until this morning.

This morning, I sold the car to someone who responded to my ad on Craigslist. I am back to that lesson-learning "season" of November. Only now, it's January and I am realizing the elementary idea that God blesses us with a life of dependence.

My circumstances will change in the weeks and months to come. Sometimes I'll need rides to church, sometimes I'll bike to the store, sometimes I'll just stay in, sometimes I'll ask students for a lift, and hopefully sometimes I will be able to offer rides again. Regardless, I am confident that the Lord always seeks a dependent heart. Obedience doesn't always bring blessings in the form we hope. I'm convinced that nothing in life - absolutely nothing - can separate me from the eternal, unconditional love of Christ (Romans 8:38).

Joshua reminded the Israelites to be strong, take heart, and wait on the Lord. I praise God that He is patient as I learn and re-learn lessons. I can see His patient hand as He looks down on me, "Now, child let's discover what it means to depend once again. Know that it is the joy of my heart to see my children display and declare my beauty. I will bless you on your road to discovering thankful."

Let me not forget.
Posted by Caroline at 10:53 AM No comments: Links to this post

Men Without Chests... and the miseducation of children

The book starts with an eloquent description of an elementary text book.

An interesting object on which to base an argument, but C.S. Lewis does just that in his opening of what was originally a lecture series titled "The Abolition of Man" (the subtitle reads: Reflections on education with special reference to the teaching of English in the upper forms of schools).

With all the nebulous talk of improved education among scholars and legislators, I have long wondered if there is truth to the fabled "subliminal message." After painstakingly reading one of Lewis' most controversial books, I submit that merely wondering at such a possibility is just as damaging as promoting it.

C.S. Lewis refers to the elementary text in question as The Green Book and sets out to argue that the authors teach very little about literature. In fact, The Green Book essentially seeks to 'debunk' the existence of any objective value.

Now, that may not strike you as dangerous or deceiving, but this ideological shift is not so plainly described by the authors. The example Lewis gives from their book cites the "well-known story of Coleridge at the waterfall" (of which I knew little) where one tourist called a waterfall sublime and the other pretty. Lewis writes that Coleridge, a renowned poet, mentally endorsed the first description and was disgusted in the second. This is the excerpt from The Green Book:

Keep in mind, the young mind for which this text is intended has little reference for such a proposition. Boys and girls are more concerned with receiving good marks then defending the notion of objective value. And herein lies the danger.

The authors (possibly unintentionally) are making no claims about literature. They are instead suggesting that human sentiment is contrary to reason and ought to be eradicated. Interestingly enough, as Lewis points out, to say something is reasonable or unreasonable means that there must be a standard to make that judgment.

And now, by way of this disastrous summary of Lewis' first chapter, we start to see the development of Men Without Chests. Assuming objective value is unreasonable, Lewis moves toward the logical question: On what grounds does any value exist in the world and what force would move me to protect this fleeting, traditional idea?

Interestingly enough, though this idea is purported in institutions across the country, the opposite is expected in life's vernacular. Students might be taught to disregard value and view all things in relativistic terms, yet when it is time to preserve society, all are called to sacrificially stand on the high grounds of character. Lewis writes that youth are encouraged to strive to be people of character, while being conditioned to believe such traits are unreasonable.

"In a sort of ghastly simplicity," Lewis writes, "we remove the organ and demand the function. We make men without chests and expect of them virtue and enterprise."

Strip life of sentiment and you are left with a skeleton. Relativism may be trendy and "progressive," but this kind of progress would lead straight to humankind's demise. There will simply always be those who make the rules and those that follow them. If the rule makers decide life is void of sentiment, they will certainly reap the benefits of this stale standard.

Dangerous? yes. Deceptive? yes. Merely wondering at the possibility of 'value debunked' is just as damaging as promoting it. Can we recapture the necessary distinction of humanity? Can we hold firm the objective value intrinsic to our created nature? I believe we were born for such a purpose.

Maybe someone should write a children's book about it.
Posted by Caroline at 2:04 PM No comments: Links to this post 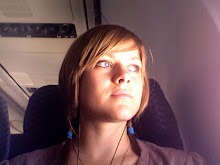